26.11.2017
The 5th Bike Rally of Medicover Foundation ”Together Against Type 2 Diabetes” volunteers’ ended in Gdynia on June 18th with a big final. By organizing a bike trip from the Tatra Mountains to the Baltic Sea with tests performed in six Blue Towns, we’ve taken diabetes for a ride! 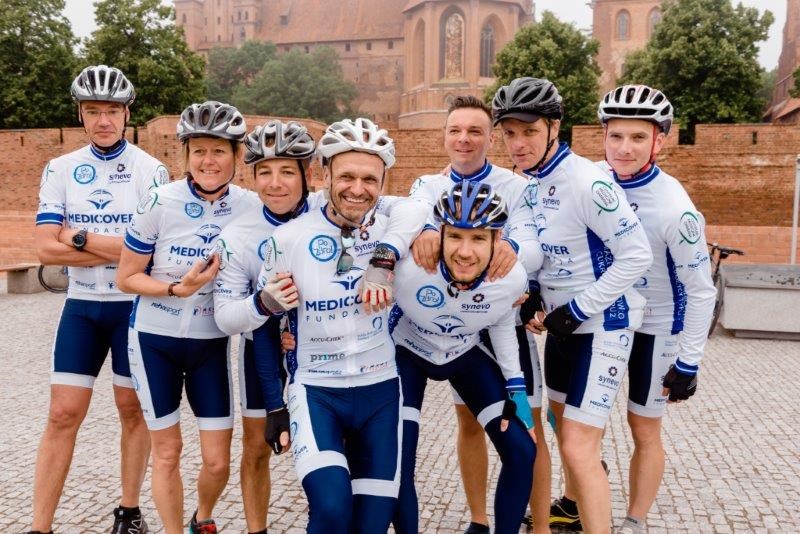 If the final of Bike Rally ”Together Against Type 2 Diabetes” is to be celebrated again, it has to be done exactly as it was – at the finish line in Blue Town in Gdynia, on Sunday, June 18th, emotions reached their zenith, and the joy was enormous.

Within a week, two teams covered the route of more than 1,000 kilometres. As many as 2,800 people have been checked up free of charge at the so-called Blue Towns in Kraków, Wrocław, Zielona Góra, Poznań, Bydgoszcz, and Gdynia. Numerous fans, special guests, joy and great adventure: all these to combat the epidemic of lifestyle diseases – a purpose that is key for health. It has already been the fifth time when the volunteers of the Medicover Foundation, who work at different companies of the Medicover Group, took diabetes for a ride via healthy lifestyle!

Gdynia appeared on the map of this developing event for the third time. The bikers departed from Zakopane on June 11th to cross the finish line in Gdynia on June 18th. In Poznań, on June 15th, another team of bikers joined the Rally – they set off from Berlin on June 13th. Along the route of the rally, the Blue Towns were organized – these were the places where everyone had an opportunity to ask for a free health check, get advice of experts and receive information on how to prevent type 2 diabetes.

Rally’s mission: to combat the epidemic of type 2 diabetes

Diabetes, as the first among non-infectious diseases, was described as the epidemic of 21st century by World Health Organization (WHO). According to the Polish Diabetes Association, the current number of people with diabetes in Poland is over 3 million, and hundreds of thousands of them are unaware of their condition. In the world, the number of people suffering from diabetes is over 415 million. Every six seconds someone dies in consequence of diabetes complications. Over 160 million of cases of this disease could be avoided – just by living a healthier lifestyle.

Unfortunately, diabetes is a deceitful enemy. It develops without causing any pain and for a long time. It affects body organs leading to health and life-threatening complications. As many as 90% of diabetes cases are type 2. However, there are ways to counteract! Early prevention: health screening and healthy, active lifestyle.

The Medicover Foundation, for the fifth time, benefitting from the Medicover’s support and medical experience, organized the charity Bike Rally to draw the people’s attention to this growing problem.

Record number of tests participants – over 2,800 people got a health check

There were six Blue Towns – these were the stops for cyclists along the route where for one day between June 11th and June 18th, the inhabitants could ask for a test and consult experts. As many as 2,800 people got a health check-up. It is a record breaking edition of the Rally. During last year’s event, as many as 2,000 people were tested.

Inside the tents of the Medicover Foundation every visitor was given an opportunity to have free blood tests for glucose and cholesterol levels, to have their blood pressure measured and also to have their metabolic age calculated and body composition estimated with the use of professional bioimpedance scale. Moreover, depending on a town, the visitors could consult nutritionists, physical therapists, stomatologists and dermatologists.

Apart from volunteers – employees of Medicover Group, representatives of four countries (Poland, Germany, Romania and Ukraine) – some special sports personalities also participated in the Rally: triple world champions as well as Rio Paralympic gold medallists in tandem cycling, Iwona Podkościelna and Aleksandra Tecław. Expressing support for combating diabetes and promoting sport as part of healthy lifestyle, this outstanding duet joined the Rally in Poznań on June 15th and continued to the final Blue Town in Gdynia.

The Rally’s Final – PoZdro! for cyclists

A group of 38 cyclists appeared on the horizon of the Kościuszko Square in Gdynia on a hot Sunday, June 18th slightly after 2 p.m., emanating joy of finishing that tough trip. Accompanied by meaningful song “We are the Champions” by Queen, they cycled the last few metres on a walk of fame along Blue Town at the Kościuszko Square. They received an enthusiastic welcoming cheer from spectators, fans, passers-by and friends.

There were hugs, tears and screams of joy, buzz, noise, positive mess and common wave of joy. It was the time of extreme emotions for all spectators, of course mostly for the participants who were happy to finish the Rally, and happy to have overcome their limitations and to rise to the challenge.

After a while a shout could be heard: Let’s go to water! Then… the cyclists moved quickly towards the beach and, to sunbathers’ surprise, they went straight into the cold Baltic Sea with their cycling suits on. So the Rally’s tradition has been observed, and then it was completed.

Our shared mission “Together Against Type 2 Diabetes” (edition 2017) has been fulfilled at the level of more than 100%. The cyclists crossed the finish line with no harm, the outcome of the performed tests is record-breaking. But this journey is not completed yet – our diabetes challenge is still there. Certainly it will be represented in our future actions and campaigns.

We would like to thank everyone who visited Blue Towns, supported the cyclists, got engaged in our event and decided to take diabetes for a ride - because it can be prevented and it should be prevented.

Fanpage of The Rally od Tatr po Bałtyk (from the Tatras to the Baltic Sea)!

About Us Medicover Foundation